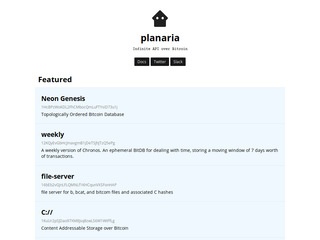 Here's how it works:

Thanks to the containerized architecture, everything is portable. No one organization can own an API endpoint. Anyone can deploy and run a public Planaria API endpoint with just a single command.

You can learn more about Planaria by checking out the Documentation area.

Planaria node developers now have access to much more powerful features, including: