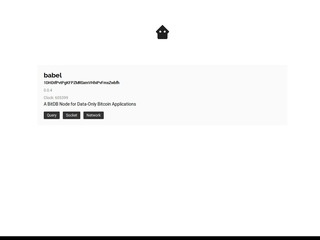 Babel is a BitDB node designed for data-only applications (apps that use OP_RETURN to store data, instead of money transfers)

Most Bitcoin applications that use the blockchain as a database DO NOT need all the transaction details, because they only need to query OP_RETURN outputs and a couple of other attributes.

1. What a BitDB Full Node Does

Let’s first take a look at what a Bitdb “full node” provides (as seen on https://bitdb.network website);

Those are a lot of things, ranging from “graph database” to “script database” to “transaction database”. This comprehensive nature is useful for many Bitcoin applications, but not all applications need access to all of these features simultaneously.

Especially, most applications that only use the Bitcoin blockchain to store and read immutable data, just need to query OP_RETURN outputs and a couple of other useful attributes, and nothing more.

And THIS is what Babel provides.

2. What a Babel Node Does

Babel is a subset of the Genesis.Bitdb designed specifically for data intensive Bitcoin applications. Highlights: